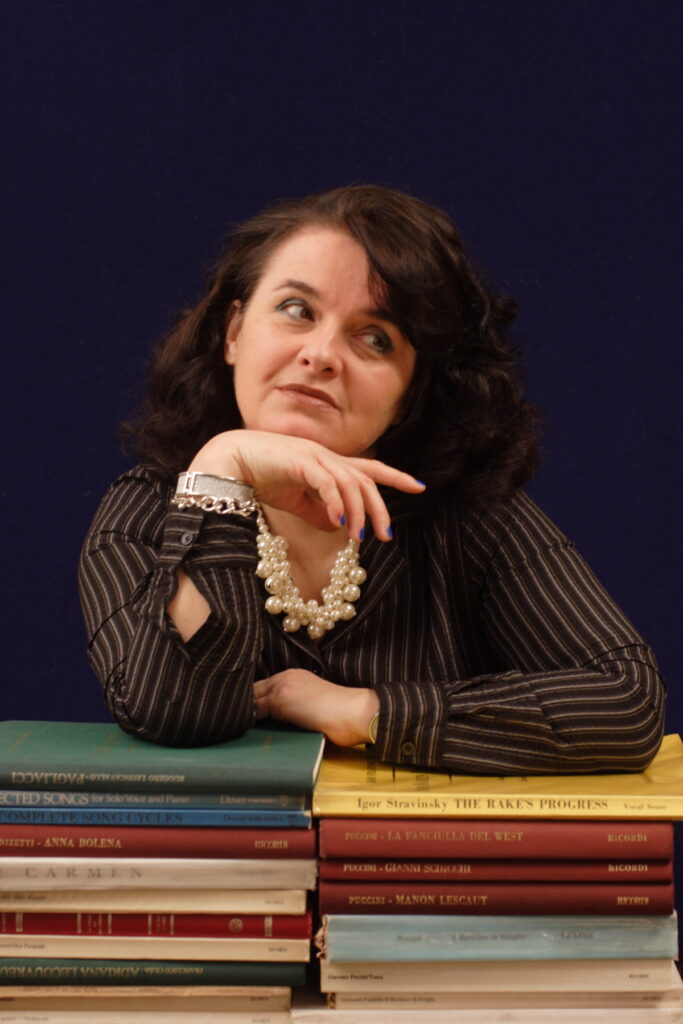 Winner of the Italian edition of the International “Placido Domingo” Competition 1994-1995. Finalist at the Milan Scala Theatre Masterclass for Opera Singers, 1997 edition. Performances: In July 1991 Barbieri played Nina in Paisiello’s La Nina Pazza per Amore at the Montepulciano Festival, where she also sang Mozart’s Spaur- Messe under the conduction of M° Hans Werner Henze. Her theatrical debut was in 1992 as Tebaldo in Verdi’s Don Carlo at the inaugural season of the bicentenary of “La Fenice Theatre” in Venice and under the conduction of M° D. Oren.

In the 1991-92 season, she debuted in the role of Lauretta in Puccini’s Gianni Schicchi at the Montecarlo Opera and as Prima Turista in the first ever performance of S. Rendine’s Un Segreto d’Importanza. Both productions were filmed, respectively in Treviso’s Municipal Theatre by M. M.De Bernard and at the Schwetzingen Festival, Germany.

Conduction of M° G. Gelmetti. Barbieri also performed as Yvette in Puccini’s La Rondine for the Stuttgart Radio (SDRI), which was broadcasted in several European countries. In 1993, as the prize for the Pavarotti Competition, she won the role of Mimì for the opening of Puccini’s La Bohème at the Philadelphia Opera Company, USA, under the conduction of M° L. Salemno. She then returned to the same role at the “R. Valli” Theatre in Reggio Emilia, under M° M. Benini. In the summer season of 1993-94, she took part in Spoleto’s “Festival dei Due Mondi” in the role of Lauretta in Gianni Schicchi and as the performer of Schubert’s Mass D.167 for the closing concert, with the Westminster Choir and conduction by M° Steven Mercurio.

The mass was broadcasted on RAI Radio3. In 1993 Barbieri held a recital at the Mandel Festival, Germany. To be mentioned in the same year also a concert at Harewood House, England, in collaboration with G. Sabbatini as tenor and M. Benini as conductor; and a recital at the Forcalquier Festival, France. The 1993 season saw her at the Municipal Theatre in Florence, in Rossini’s Il Barbiere di Siviglia, conduction by M° P. Olmi. At the end of the same year, she debuted in the role of Margherita in Gounod’s Faust at the “Teatro Verdi” in Sassari, under M° A. Guingal.

In 1994 she performed Mendelssohm’s Sommernachtstraum for the RAI, conduction of M° F. Shipway. She then debuted in the lead roles of Costanza and Isabella for first ever performance of F. Battiato’s Il Cavaliere dell’Intelletto, conducted by M° M. Boni.

The opera ran in Palermo, Jesi, Cosenza, Turin, Piacenza, Modena, Parma, Ravenna, Messina, and at the Fano Festival, where she performed with I Virtuosi Italiani. In 1995 she performed as Merlina in Cimarosa’s L’Impresario in Angustie for Radio Lugano (RSI), with M° G. Gelmetti as conductor. She debuted as Adina in Donizetti’s Elisir d’Amore at the Municipal Theatre in Modena and the “Alighieri” Theatre in Ravenna, under the conduction of M° R. Bonynge. In the 1996 season, Barbieri played Mimì in La Bohème at the Opera Royal de Wallonie, Belgium, and Reims’ Grand Theatre, France – conduction by M° Friedrich Pleyer. She also performed as Dhia in Mascagni’s Iris at the Opera Theatre in Rome, which she played again in Munich with the collaboration of Münchener Philarmoniker and M° G. Gelmetti. In 1997 she was in Il Barbiere di Siviglia at the Opera Theatre in Rome, again conducted by M° G. Gelmetti. She then debuted as Susanna in Mozart’s The Marriage of Figaro at Fano’s Festival under M° Aldo Sisillo, and as Micaela in Bizet’s Carmen with the Welsh National Opera and M° C. Rizzi. The opera had a run in several British cities, including Liverpool, Bristol, Birmingham, Oxford, Southampton, Plymouth and Cardiff. She spent the 1998 season at the “Teatro Regio” in Turin, in the role of Dhia in Iris, under M° G. Gelmetti. In 1998-99, she also took up the role of Anne in Stravinsky’s The Rake’s Progress for the theatres of Modena, Reggio Emilia, Piacenza, Ravenna and Ferrara, which aired on RAI3. Finally she performed in La Bohème at the Municipal Theatre in Bologna, the 1999 Christmas Concert and Puccini’s Suor Angelica in Amsterdam, at the Concertgebouw ,direction of M° R.

Chailly. The 1999-2000 season saw Barbieri in the role of Margherita, in Gounod’sFaust, and yet again Mimì in La Bohème for the “Teatro Massimo” in Palermo. In October 2000, she debuted as Liù in Puccini’s Turandot at the “Teatro Verdi” in Sassari. In December 2000, she returned to Amsterdam’s Concertgebouw and the conduction of M° R. Chailly to debut as Nella in Gianni Schicchi; and, later, to the Opera in Rome for yet another debut, Magda in Puccini’s La Rondine.

She concluded the year as Mimì in La Bohème at the Messina Theatre. In 2001 she played Liù in the Turandot at the “Teatro Rendano” in Cosenza. The 2002 season saw Barbieri first in Rome, as Lauretta in Gianni Schicchi, and then in Palermo (“Teatro Massimo”) as Donna Anna in Mozart’s Don Juan. In the same season, she toured as Liù (Turandot) in several northern Italian theatres – including Modena, Piacenza and Ferrara. She also performed alongside the Orchestra Sinfonica Siciliana and M° A. Veronesi in an opera-symphonic concert for the Valli di Agrigento Festival. In 2003-2004, she debuted as Norina in Donizetti’s Don Pasquale at the Baltimore Opera Company (USA), under the conduction of M° C. Desderi and direction of S. Vizioli. She took part in the 2004 Christmas Concert in the Municipal Theatre in Modena, singing the role of Micaela in Carmen: this was performed as a concert, with orchestral accompaniment, and was recorded live for DVD. Barbieri then performed at the Opera-Symphonical Concert in the Abbey of Chiaravalle (PC), under the conduction of M° F. Cassi. Recently the DVD of her performance as Nella in Gianni Schicchi (Amsterdam, Concertgebouw, conductor R. Chailly) was also released. In February 2005, she took part in the celebratory concert for Mirella Freni’s 50 years of career, at the Municipal “L. Pavarotti” Theatre in Modena. In 2005, Barbieri was also invited by the Italian Embassy to hold symphonic concerts in Tallinn, Estonia, and Parma, Italy – where she took part in the first ever performance of M° G. Veneri’s Requiem and collaborated with the Toscanini Orchestra. In May 2006 she returned to the roles of Micaela in Bizet’s Carmen at the “Teatro Verdi” in Salerno, and Liù in Puccini’s Turandot at the Caracalla Baths in Rome. She also played Mimì again (La Bohème) in Catanzaro and Salerno. She debuted as Alice in Verdi’s Falstaff in June 2007, at the Schlachthaus Theatre in Bern, Switzerland.

In May 2008, she sang Verdi’s Gloria in the St. Augustine Church in Modena, and performed a selection of zarzuelas pieces for “Gli Amici del Loggione della Scala” in Milan, where she collaborated with baritone A. Ariostini e conductor G. Muglialdo. In May 2009 she debuted in the lead role of Anna in Puccini’s Vill, in Oviedo, Spain.

In August 2009, Barbieri returned to the role of Mimì (La Bohème) for the 55° Puccini Festival in Torre del Lago. In 2010, she debuted in Schumann’s Manfred for both the seasons of “Teatro Regio” and “Teatro Stabile” in Turin. She later debuted in the role of Leonora in Verdi’s Oberto Conte di San Bonifacio for the summer season of Palazzo Farnese, in Piacenza. In 2012 she sang again the role of Adina in L’Elisir d’Amore in Fayence, France, at the Espace Culturel, and at the “Teatro Pavarotti ” in her native Modena. Here she also performed in Rossini’s messe solennelle. In the same year, Barbieri took part in several concerts at the invitation of Florence’s Cultural Association NAJS, played Mimì (La Bohème) at the “Teatro Mazzacurati” in Bologna, where she also performed in the fundraising concert for the Rovereto victims of earthquake. In 2013, she sang J. Haydn’s Missa Brevis and Verdi’s Gloria in the St Bartholomew Church, Modena. She also held an opera recital at the “Teatro Fabbri” in Vignola (MO), Italy, and several more for “Gli Amici della Lirica di Mirandola” in Modena, the Bagnara di Romagna Auditorium and the Casa Verdi Auditorium in Milan.

In 2014 and 2015, Barbieri returned to her classic role of Mimì (La Bohème) at the “Teatro Mazzacurati” in Bologna, and held several opera concerts at festivals and associations. In 2014 she also won the G. Rossini Prize, held by the Rossini Association of Modena. Recently, again in Modena, she performed in G. Fauré’s Messe De Requiem. In 2016 she was the recipient of the Mirella Freni Prize, held by the Mirella Freni Association of Modena – besides holding more recitals. In March of the same year, she recorded a CD on a selection of Luigi Gazzotti’s chamber airs, “Arie da Camera”, for the record company Tactus. This was released to great public acclaim, and had its first ever performance in the “Fabbri” Theatre in Vignola and in the “Pavarotti” Theatre in Modena. More recent activities – in the spring of 2017 – include a chamber concert in La Galleria Estense, Modena, a concert in Casa Verdi, Milano, and a performance of Mozart’s Requiem again in St Bartholomew’s Church, Modena. In the autumn of the same year she took part in the commemorative opera recital for the 10th anniversary of Luciano Pavarotti’s death, held in the “Pavarotti” Theatre in Modena. The recital was subsequently filmed in the “Rita Levi Montalcini” Auditorium in Mirandola on 29th October 2017. In 2018, Barbieri performed in a recital at the Municipal Theatre in Faenza, and sang Rossini’s Stabat Mater both in St Bartholomew’s Church, Modena, and at the “Rita Levi Montalcini” Auditorium in Mirandola. In addition to this, she held a duo recital in Palazzo Camozzini, Verona, Italy. She was recently invited to hold opera recitals at the Smarano Organ Academy, “La Sala dei Giganti” in Padua and the “Circolo della Lirica” in Bologna. Barbieri is currently recording the complete work for piano and soprano of a 19th century Italian chamber musician – who cannot be named for contractual reasons – once again for the record company Tactus.

She collaborated with several conductors, including:

She collaborated with directors such as: